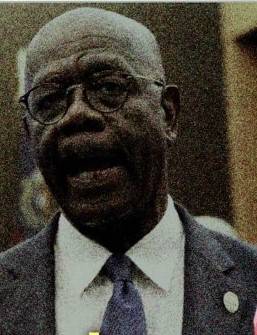 A campaign document mailed to Fulton County voters brings the issue of race into a contest in which both candidates are Black. The document contains a photo of DA Paul Howard that has been altered to show a grainy and darkened representation of him. This has been a tactic of GOP interests intended to paint Black men and women in an unflattering light. There are three other faces on the document, none altered to produce the grainy and darkened effect applied to Mr. Howard.

There is no organization name on the document but the permit number traces to a company that has produced materials for former Atlanta Council member Mary Norwood. Ms. Norwood reportedly tried to bargain with Attorney Christian Wise-Smith, the third candidate in the race for DA, to support sentencing Black teenagers to a private prison farm in exchange for Buckhead money and support. Wise-Smith declined. Now Ms. Norwood is supporting Attorney Fani Willis.

We call on candidate Attorney Fani Willis to denounce these tactics and to return any contributions from interests who promote a return to Jim Crow sentencing of Black youths, men and women.