Why Advocate Against the Confederate Memorials? 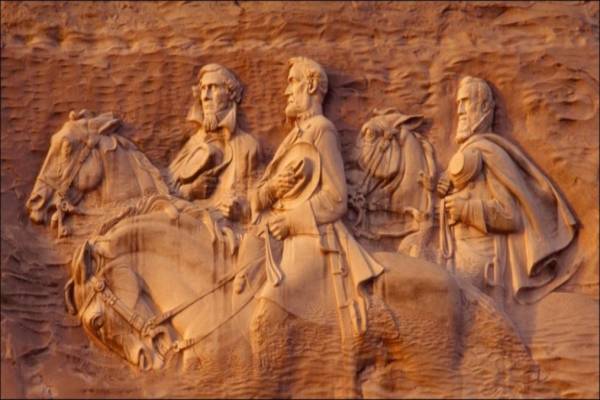 Web site comments and Facebook posts ask why we advocate against the Confederate Memorials at Stone Mountain.  The answer must be prefaced by some history.  The Ku Klux Klan began cross burning at Stone Mountain in 1915 and fundraising began for the carvings in 1923 by the United Daughters of the Confederacy and after starts and stops, was completed by the State of Georgia in 1970 under segrationist Governor Lester Maddox.  The property itself was purchased in 1958 under avowed racist Governor Marvin Griffin who claimed that the South was looking to Georgia for leadership against integration.

The erection of Confederate monuments coincided with and supported Jim Crow laws and attitudes that included voting rights suppression, inferior educational resources for African Americans, unequal treatment under the law, denail of access to public accommodations and economic oppression.  All of these actions were and are intended to marginalize African Americans and maintain a system of white supremacy still endorsed the the State of Georgia and other states some 150 years after the end of the Civil War.  Despite attempts to rewrite history and restate the cause of the war, the continuation of slavery was the reason cited in succession documents by South Carolina, Georgia and other states for the attempt at overthrowing the United States.  The war was fought to preserve slavery, not to end it.

What other country celebrates a failed attempt to overthrow itself, unless Georgia does not consider itself a part of the USA?  There are no celebrations of the Nazis in Germany!  Is slavery no less vile than the slaughter of 6 million Jews?

These monuments encourage the evil individuals by suggesting that although the South lost the war, its cause was noble and just.  They imply, infer, assert, declare and reinforce the notion that African Americans are less human that Whites and can be beaten, tasered and killed with impunity.  Trayvon Martin, Eric Garner, Walter Butler, Tamir Rice, Sandra Bland and the Charleston 9 are all victims on the attitude fostered by the likes of Stone Mountain.