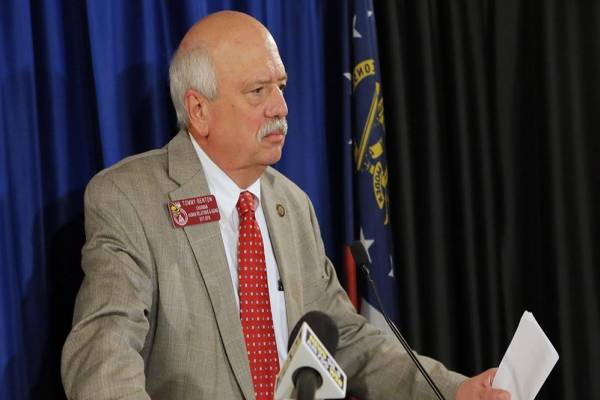 Even as our national political leaders have finally signaled they will no longer tolerate racism and bigotry among their ranks, Georgia’s state legislature has refused to follow their lead and instead continues its embrace of divisiveness, prejudice and intolerance.  While the U. S. House of Representatives, led by Republicans, last week stripped Iowa Rep. Steve King of all committee assignments for recent racist statements and his continued support of white supremacy, Georgia House Speaker David Ralston decided to return Rep. Tommy Benton to a House leadership position, despite Benton’s continued support of the same bigotry for which King was censured.

Like King, Benton has a long history of support for racist institutions and white supremacy.  Benton equates Confederate leaders with the American revolutionaries, which is akin to likening the men who initiated a failed insurrection against their own country to protect the hideous institution of slavery to those who created a nation with the guiding principle that “all men are created equal,” a creed we are still striving to achieve.  But Benton claims, “The war was not fought over slavery." It’s a lie that every reputable historian has debunked, but he and others propagate this myth so as not to betray the core reason why Southerners began the war by attacking Fort Sumter in Charleston, S.C., and the Confederacy came into existence -- to keep black people in bondage and maintain white supremacy.

He praises the Ku Klux Klan, saying “It made a lot of people straighten up." The Klan “was not so much a racist thing,” he says, “but a vigilante thing to keep law and order.”  It has been documented ad nauseam that the Klan, created and led by one of Benton’s Confederate heroes, Gen. Nathan Bedford Forrest, were the original American terrorists, so much so that in 1871, Congress passed the Ku Klux Klan Act because its disciples were murdering white and black people across the South and even disrupting state governments to achieve its goal of white supremacy.  It was resurrected in 1915 on Stone Mountain and for more than 50 years cut a brutal swath of violence and terror across the South and much of the nation.  Its adherents burned and bombed African-American homes and churches while murdering and lynching black men, women and children from Macon, Indiana, to Indianola, Mississippi, for attempting to vote, for wanting better schools, better jobs, better housing and for something as trivial as being in town after sundown or looking at a white person the wrong way.

Like Rep.King, Benton, or any other elected official who holds to such racist ideology, should be stripped of all his committee assignments, because he or she should not be in a position to affect the policies that govern our state and its more than 3 million African-American residents.  In so many ways, however, Benton reflects the larger issue.  Despite the relatively progressive racial climate in metro Atlanta, too much of Georgia follows the sentiment of the Confederate carvings at Stone Mountain, the largest shrine to white supremacy in the history of the world. Less than 2% of Georgia’s annual spending for roads and contracted services is with businesses owned by African Americans, and Georgia refuses to fund needed educational resources for students victimized by the legacy of racism that has crippled generations of its black citizens.

We call upon business leaders and chambers of commerce all across the state to repudiate the racist symbolism that encourages the divisive practices, policies and legislation that continue to oppress Georgia’s people of color.  Business leaders should join the advocacy against racism and bigotry by supporting the work of the organizations dedicated to a Georgia that does not punish a third of its citizens based on race. In America, the tone of inclusiveness starts with removing government support of Confederate monuments, names and recognitions that celebrate and normalize the traitorous insurrection against the United States of America.